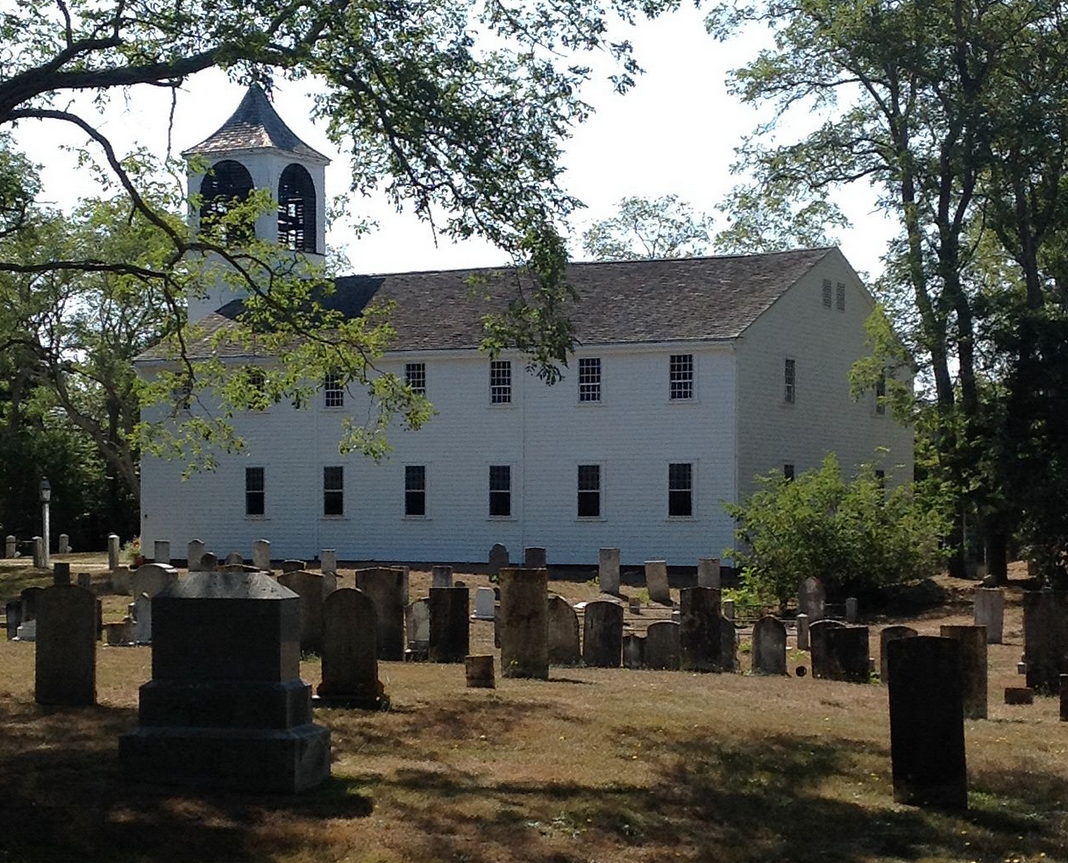 The First Parish Truro, United Church of Christ, is so named because it was the first church in the town of Truro.  In fact, Truro could not incorporate as a town until the parish was established, which took place in 1709.  The current church is the oldest building on the Outer Cape, built in 1827.  It is part of the First Congregational Parish Historic District:  https://en.wikipedia.org/wiki/First_Congregational_Parish_Historic_District

This area encompasses the church itself as well as the surrounding cemeteries, which are occupied by many of Truro’s historic residents as far back as 1810.  The cemeteries are open for public observation each day from sunrise to sundown, and the church is open summer Sundays and several Wednesdays for tours through the summer months.  Special services at other times of the year are announced on this website as they arise.

At the installation of the congregation’s current co-pastors, Revs. Chad and Anastasia (Anna) Kidd, Carlotta Zilliax, the church’s clerk and historian, offered the following observations about the church’s pastors throughout the years:

A History of Pastors for Reading at the Installation

As clerk of First Parish Truro, I found considerable difficulty in determining how many pastors the church has had since 1709 when it was founded as requisite for the town to incorporate. Some men stayed only briefly—even though they were installed as settled pastors—and some were shared with the Methodist Episcopal church, others with Wellfleet Congregational, and still others with the Christian Union Church of North Truro. However, the early beginnings were auspicious:

The first three pastors, John Avery, Caleb Upham, and Jude Damon—all leading worship in the two original meeting houses in North Truro—served a total of 118 years, and their tenure must have contributed to the stability of that early church. John Avery, first pastor from 1710-1754, was called at a salary of 60 pounds a year and was reported to be at the same time “pastor, doctor, lawyer, smith and farmer.” Well thought of and compassionate, he seems to have been both energetic and well educated.

When this, our 1827 meeting house, was built, services were led by Rev. Stephen Bailey, but he was succeeded in 1832 by a series of pastors until 1849 when Rev. Edward Noble took over. He served until the 1880’s, living in the “ministerial premises” (parsonage) on North Pamet Rd. The celebration of his quarter centennial in 1874 revealed the esteem in which the congregation held him. Clearly they felt supported and cared for as well as welcome in his home, “the ministerial premises.” And these were difficult years as 84 Truro men served in the Civil War’s Union Army or Navy (with ten fatalities), and as the town suffered a significant drop in population due to the end of the fishing economy.

In the 20th century, some of us here remember the succession of Reverends Townsend, Heap and Dronesfield and especially the late Dick Stoughton who as a retired UCC pastor came to try our summer church for a year or two and stayed twenty-three. He often called our attention in his sermons to diligent heroes who work in our world to alleviate suffering. An advocate for fairness, Dick was the first to urge us to honor equal marriage.   And we feel privileged that Chad and Anna’s immediate Presbyterian predecessors Ron Sloan and his co-pastor, Erik Spencer, still worship with us.

Dick Stoughton once said that Andover Newton graduated a woman in the 1950’s. High time we had one as our pastor!  During many years of this church’s history, women were tireless workers for First Parish, and they often significantly outnumbered the men. How fortunate that our first woman pastor should be a tireless woman who comes with her co-pastor husband.

Anna and Chad bring so many gifts to our church: among them, youth, energy, commitment to community and a collaborative devotion to their shared mission as interpreters of Scripture in our difficult contemporary world. Yet they have humor and can be light hearted, and have a depth of humanity that means that when you speak, they hear what you say.

We called them because we knew them and they knew us. For several years they had appeared as guest preachers to the congregation—and to its animals—giving us an introduction to the depth and resonance of their sermons. And their ties to family here in Truro and their love of the Outer Cape go back in their lives.

We called Chad and Anna because their outside lives feed our inside spirits.  Their “day jobs” enrich who they are and what they bring.  Chad’s work at Brooksby Village Senior Living attests his respect for those of us with longer life histories and his sympathy for the challenges faced at this stage of our lives. His music ministry, one might say, “sings” for itself and contributes to the central place music has long had in the tradition of our worship and our community concerts.

Anna’s position as Director of Admissions at Boston University School of Theology ties her solidly to the future of the UCC and the theological and intellectual education of its young pastors.

And the future is key here. We called Anna and Chad because they have ideas about outreach, about ways to extend our worship services and our brand and ways to work with the community and the Friends of the Meeting House to be welcoming and inclusive to all. To find ways to bring people to the spirit of God within this place and within themselves. To worship—to be—with a sense of the beauty that surrounds us and the joy of fellowship.

We called Chad and Anna because we want to attract those willing to carry on this church and its work when we are gone. Do we want to grow our membership? Of course, don’t all churches want that? And it would be delightful to fill these pews as they were in the 19th century, but it is abundantly clear that whether our numbers are many or few, with Chad and Anna Kidd, the quality of worship, of mission and of our lives is in good hands.